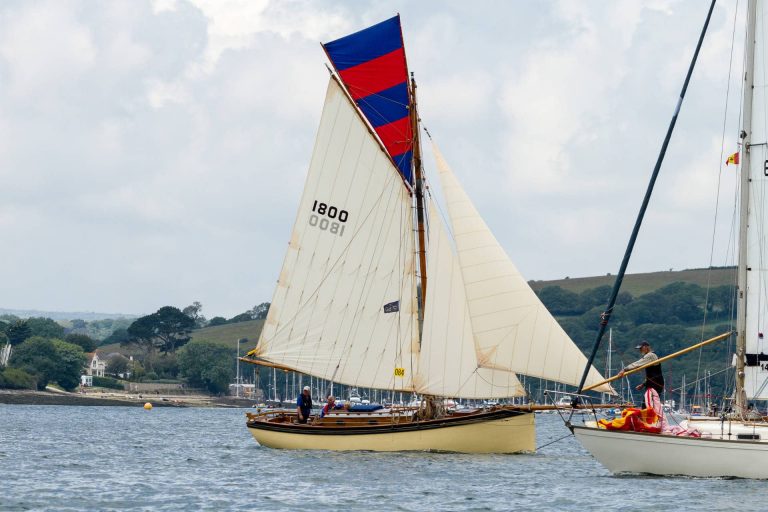 The four prize winners in the first ever 2021 Pantaenius sponsored West Country Classics Series, for classic and heritage sailing yachts, all gained good results in the 2021 Falmouth Classics. Results for two or more of three Classic sailing events which included Falmouth, Fowey and Dartmouth Classics were combined to calculate the four winners.

The prizegiving was hosted by Saltash Sailing Club during Storm Alwen. Skippers and crews from the ten boats that completed two or more of the events, gathered with partners and supporters to witness the presentations. All boats received a flag as a memento of participating in the first West Country Classic Series. All ten boats chalked up points in the 2021 Falmouth Classics. Eight of the ten boats were either gaff or lug rigged. The oldest being the Looe Lugger Our Boys, winner of the Falmouth Classics’ large lug class, which was launched in 1904.

Sue Treneer, who has been involved in running Falmouth Classics in a variety of capacities for 35 years, including the role of race officer and currently the administrator, presented the prizes. In first place scoring 191 points was the Falmouth built gaff cutter “Cynthia”. She was built in Thomas Jacket’s yard in 1910 and is now owned by Peter Lucas of Dartmouth. Close behind in second place with 190 points was “Mary Ritchie” a 27’ gaff cutter built by John Fuge of Golant in 1992. She is owned and helmed by Don Garman, Vice Chairman and Director of Falmouth Classics Association and is moored on the Helford. In the Fowey Classics she was the winner of the Trafalgar Cup. Third was the Mylor built Heard 28” Capraia” with 177 points owned by Patrick Vyvyan Robinson and fourth with 169 points was the Swan 55 “Lulotte” owned by Ben Morris.

The idea for the series came from Bruce Thorogood the organiser of the biannual Channel Classics. Bruce said “The purpose of West Country Classics Series (WCCS) is to increase the number of vessels in all three events and to attract participants from other parts of the UK and France. The WCCS been an idea for a while but its introduction was delayed by Covid, so the organisers and myself are delighted that 2021 has seen the birth of the series, which culminated in a splendid prize giving event. We are very grateful to Pantaenius for sponsoring the series and to Salcombe gin for contributing to the prizes. My colleagues and I look forward to increased numbers in 2022”.

The next West Country classics Series will begin in 2022 at the Falmouth Classics from 17- 19  June.