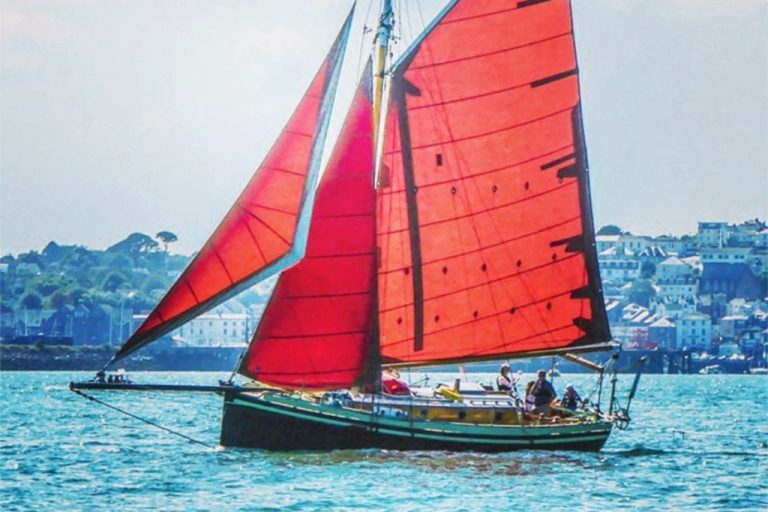 Built in 1988, Moondance was designed by the late Percy Dalton, a well known West Country Designer. It was Dalton’s Saint Melorus which formed the basis of the Heard 28 Oyster Dredger which nowadays forms the backbone of the Falmouth working boat racing fleet. After the hull was completed in 1980 Moondance was bought and completed by Martin Brown. She is fitted out in hard woods with a Singer sewing machine as a saloon table.

Moondance was initially based on the River Rother, Rye, and later on Conwy in North Wales. In 1991 she set off on a six-year voyage via Lisbon and Gibraltar to the Caribbean and back via the Azores and the French canals. Later she sailed off again for another two years, as far as Lisbon before returning to Falmouth for sale in 2001. Her next owners kept her at Gweek on the Helford.

In 2007 she was bought by the Wynn brothers (and their families) who kept her in Essex and South Devon. In 2008 they sailed her to France and around Britain via Scilly, Baltimore, Galway, the Outer Hebrides, Orkney and Whitby.

In 2016 Moondance was bought by Jake and Martha Burnyeat and is now on the River Fal at Roundwood Quay.

She was refitted in 2021 with a new engine, new electrics, hull stripped back and re-epoxied, painted inside and out, rudder and bob-stay hull fittings replaced, new winches, compass, Taylors stove re-conditioned and a fridge fitted so she can serve cold beer.